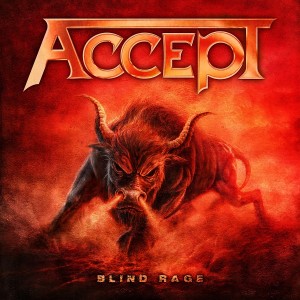 Accept has been alive and kicking, in some form or another, since their inception as Band X in 1968. Even if you base Accept’s longevity off of their official birth year of 1976, when they adopted the Accept moniker, that still makes the band nearly four decades old. Interestingly enough, this newest incantation of Accept, featuring Mark Tornillo, the not-so-new-anymore vocalist, shows the band at their most invigorated and furious in history. Blind Rage, the third full length since Tornillo’s induction in 2009 and fourteenth overall, continues the band’s trend of sounding exactly like classic Accept; full of classic hooky riffing, piss and vinegar attitude and generous amount of fist-pumping, arena styled choruses.

Both previous Tornillo-lead albums, Blood of the Nations and Stalingrad, showed Accept with a new found energy, which had been all but absent throughout the band’s work in the nineties. There was much skepticism as to whether or not Accept could continue their ass-kicking, rejuvenated version of, well, classic Accept, but with their third album into their reformation they seem to be showing no signs of slowing down. Blind Rage continues the Tornillo-era tradition of sounding like classic Accept, with catchy, heavy riffing, classy leads, driving rhythms and Tornillo’s scraped throat vocals. Tornillo is on fire, once again, sounding every bit as venomous as Udo Dirkschneider but with more range and variety in his approach.

While the rest of the band certainly aren’t slouching, the guitar duo of Wolf Hoffman and Herman Frank are unstoppable. From speedy barn burners like “Stampede”, featuring adrenaline fueled paces, to the more restrained, classic heavy metal riffing of “Bloodbath Mastermind”, these two manage to inject groove and melody into their heavy and driving riffs. Perhaps the most memorable aspects of the duo’s fretwork is the combination of melodically inspired soloing amidst the crunchy riffs, like on the album’s closer, “Final Journey”, which also shows off a fair supply of syncopated melodies. The rhythm section does a fine job, with longtime member Peter Baltes providing a thick and meaty counterpoint to the crunchy guitar riffs and Stefan Schwarzmann’s drum work galloping forward with some highbrow handwork.

A few sections spurn the fast paces and classic metal crunch, turning instead to an eighties arena-rock feel, like “Dark Side of My Heart” and “Fall of the Empire”. Although the band has always excelled at the gang chorus-led oh’s and ah’s that normally come with the style, it really only serves to slow the pace down which is not this version of Accept’s strongest feature. Take away these slower sections and you’re left with one hell of a heavy hitting classic metal album. Blind Rage continues the Tornillo fronted version of Accept’s dominance of the sound they first pioneered nearly forty years ago. The bottom line is that if you like any version of Accept, Blind Rage is a no-brainer.

One thought on “Accept – Blind Rage”