Rarely a band’s name was as aptly picked as for Finland’s Amorphis. Derived from the Greek word “ámorphos”, as in “shapeless” and “without form”, the band from Helsinki has refused to conform with the usual genre standards and always have kept their options open to shift and morph in between styles. Starting out as death metal band on their 1992 debut album The Karelian Isthmus, they began to transcend the genre and ended up being one of the first more extreme band to dabble with folk and progressive rock and subsequently creating some genre opening classics such as Tales From the Thousand Lakes, Elegy or the trilogy of Eclipse, Silent Waters and Skyforger, where they had fully found “their” sound as a hybrid between melodic, progressive folk and death metal, putting less emphasis on experiments or continuous evolution, but rather exploring a sound that has been viewed as truly “theirs”. 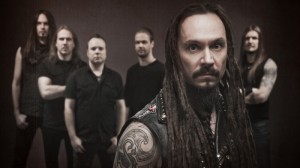 Under the Red Cloud is the Finns’ twelfth album (not counting the collection of re-recordings that is Magic & Mayhem – Tales From the Early Years) and it seamlessly continues the band’s series of high quality releases and treads the fine line between continuing to explore its own sound and creative stand still with the sure footing of a seasoned highwire artist. All the elements the past four or five albums had put in place are still present, Joutsen’s powerful growls and characteristic clear voice, Holopainen’s trademark leads and playful performance, the progressive yet accessible nature of the songs, this uniquely Finnish atmosphere and all, but never does the album sound stale, derived or treading water, instead offering some of the best Amorphis songs in their illustrious history.

Setting out with a classic Amorphis piano melody, the title track continues on through acoustic guitars and the playful guitar into a mid-paced song with irresistible melodies, Joutsen’s outstanding beauty and the beast approach to the vocals (few growlers can match his intelligible power), putting together a package that sets the pace for Under the Red Cloud, which is only just the beginning… “The Four Wise Ones” is one of the band’s (not just the album’s) best tracks with its thunderous double-bass and intense riffing going hand in hand with emotional and almost fragile verses with growls that seem to have a bit of a blackened edge here and there, and it is the constant juxtaposition of the extreme and how they still seamlessly fit together that make this song and the whole album such a memorable experience.

The prog influence on “Bad Blood” or the oriental melodies of “Death of a King” (with former Opeth drummer Martin Lopez on drums), which also come back on “Enemy at the Gates”, Amorphis still are not afraid to mesh sounds together that other bands would shy away from. “Dark Path” is another song, where Joutsen’s growls take on an additional edge, whereas “Tree of Ages” carries this jaunty and light folk influence into the song, where also Eluveitie’s Chrigel Glanzmann lends a helping flute and closing “White Night” introduces some very well implemented female vocals into the mix.

While there are no elements per se that are new to the Finns’ sound, they manage to expand their established framework that they had perfected over the past few years and continue to evolve. Overall Under the Red Cloud is one of the band’s most dynamic albums, constantly changing tempos and rhythms, creating a ride between and across genres while maintaining a firm grip on the song and album as a whole, which once more showcases the talent of this band. Additionally it manages to keep the integrity of Amorphis’ sound of the past few albums intact, but at the same time ventures out more, making it far more than just a copy of the last few. A hot contender for album of the year!