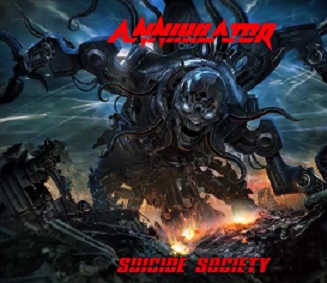 A society worth dying for?

If you have followed the career of Annihilator at all, then you generally know that their discography can be…quirky. Despite some hills and valleys of quality from record to record, Annihilator has hit a fairly cohesive stretch since 2004’s All For You. The sound is groovy thrash with enough of that classic Annihilator tone to keep fans happy without having to ignore the artistic growth the band has seen since the 80s. Just before the release of Suicide Society though, it was announced that the vocalist for the band since that time, Dave Padden, had left and that Jeff Waters would be taking over vocal duties for this album. Now, for those unfamiliar, guitarist and Annihilator frontman Jeff Waters is the writer for the band so the loss of another vocalist in the lineup isn’t wholly alarming – but I’d be lying if I said that it didn’t establish an air of caution going into this record. Luckily, Suicide Society actually steps up the quality over the last record Feast and the results are pleasantly fun and effective.

Don’t judge Suicide Society by its first single, the title track of the record. When the video dropped for the song (which can be viewed below) it further raised a caution flag about this album. No, “Suicide Society” is not a bad song, but it’s very much single fodder with its big catchy chorus and more traditional metal approach to writing. With Waters back on the vocals, it’s hard not to compare the track to something from the King of the Kill era of Annihilator and when Waters first sang for the Canadian thrashers. Again, this isn’t a bad thing necessarily, particularly if you enjoy that sound like many fans do, but that song is not the norm for the rest of Suicide Society.

From there, Suicide Society moves back into modern Annihilator form. For context’s sake, the album isn’t nearly as good as 2010’s Annihilator, but it’s a step up from the eclectic nature of Feast and rests as one of the best albums that Annihilator has released since the modernization of their sound in 2004. “My Revenge” brings back some snapping thrash riffs into the mix, “Creepin Again” is a single more in tune with what this album has to offer diversity wise, and the band always loves to throw a curve ball of quirky song writing into the mix with the strangely jazzy “Snap” and the mid-tempo and darker “The One You Serve.” All of the Annihilator elements are present here, the rock n roll riffing, the thrashing moments that throw back to their roots, the sometimes schizophrenic change ups of tone and tempo mid song, and the super clean, modern sleek production. Truthfully, if you’re one of those metalheads that hasn’t liked Annihilator since 2004, then this isn’t out to change your mind. If you still dig into what Waters and company have to offer then Suicide Society is going to rank right up there as one of your favorites of the year.

As was mentioned in the opening of this review, the biggest change (outside of stronger song writing) that Suicide Society has to offer is the return of Waters as a vocalist to the band. In the sake of being truthful to our readers, I loved what Padden brought to the band previously and it makes it hard to hear an album he would have slayed on. However, Waters really steps up his vocals here. He got by as a vocalist in past decades, but time must have shown him just how to work his style into his song writing because this is the best he has ever sounded. There is less aggressive vocals in the mix than in albums previously as he sticks more to the clean singing, but it works in spades here and when the harsh vocals are needed, Annihilator uses backing vocals to keep it heavy and it works. It lends just a bit more of a melodic feel to the entire record.

All in all, Suicide Society is a splendid return to form for Annihilator after the massively hit or miss Feast from a couple of years ago. The album remains true to the modern Annihilator sound with plenty of thrashy elements and the traditional heavy metal sense of hooks for the listener, but Waters steps up his game in song writing and as a vocalist. It’s not nearly as shred friendly as 2010’s Annihilator, which remains the best that this band has released in the last decade, but it’s right up there – and it will be a sleeper hit for a lot of fans this year.