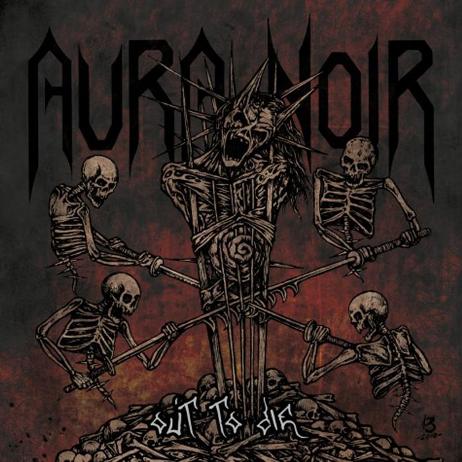 The members of Aura Noir have had their hands in some of black metal’s most notorious, respected and celebrated bands in the history of the genre: Dimmu Borgir, Dodheimsgard, Gorgoroth, Immortal, Mayhem, Nattefrost, Ulver, Ved Buens Ende, just to name a few. Aura Noir is like the bastardized version of the aforementioned bands. They’ve always retained the black metal attitude of the members’ other bands, and the listener can pick up on the huge influence there, but bits of classic German thrash and crust punk really come to the forefront.

Rather than toiling away in obscurity, Aura Noir finally signed a record deal that will distribute their music further than their neighbor’s basement. I mean, holy hell, there was a copy of this sitting on the shelf at my local mall. Aura Noir have released some freaking classic albums in the black thrash genre: Black Thrash Attack is a powerhouse of ripping black thrash tunes that is unrelenting from start to finish. On the initial listen, Out to Die is not much different from Aura Noir’s previous releases. There are some anomalies that I would like to point out, but let’s not beat a dead horse, this is classic black thrash executed to a big upside down tee (wait, did I mean cross?). Aura Noir and Out to Die are exactly what they claim to be: black thrash metal.

Whereas previous albums have displayed Aura Noir at their dirtiest, rawest and most primal, Out to Die shows the band dabbling with (gasp!) better production. Gone are the days of recording albums in your mom’s bathroom. Gone are the relentless blastbeats and trash can lid cymbals. Every instrument, including the bass, can be heard quite clearly. The guitars, as usual, are quite loud in the mix, but not to the point of drowning out the vocals.

To the uninitiated, Aura Noir is a rather raw and dirty black thrash band, usually relying on attitude rather than virtuosity or musical prowess. Thrash influenced, tremelo picked riffs; angry, raspy, shouted vocals; blastbeats and Fenriz like hi-hat weaving. There you have Aura Noir in a nutshell. Out to Die should be no surprise to anyone familiar with their earlier works, production values aside. Some songs sound like they could have come straight from early Sodom and some songs sound like a less crusty version of modern-era Darkthrone. Either way, Aura Noir have really brought a solid slab of angry black thrash to the masses with Out to Die.

Aura Noir dabbles in death metal on the opening track here, and it’s really the biggest disappointment on the album. After listening to the opener, I was left with a sudden urge to shake my head in disbelief. It’s not that bad of a track, really, it’s just Aura Noir is black thrash, not black death or whatever you want to call it. Even the vocals take on a deathy growl, rather than the raspy shouts. Thankfully, that’s where the death influence ends.

The rest of the album shows the band doing it’s trademark chugging with extrapolated fills. The drums sound like Satyricon or Darkthrone, blastbeats mixed with thrash and crust elements and the weaving hi-hat throughout. The vocals are excellent: for the most part a raspy, shouted style, similar to standard black metal, only without the annoying shrieking. The riffs are stellar and are definitely headbang worthy.

Honestly, if you would take away the first track, this would be a monumental album. This may be Aura Noir’s best work to date. There is nothing groundbreaking here, but this is a solid slab of enjoyable black thrash. Recommended to fans of thrash and black metal. If you like black thrash, you have Aura Noir to thank. Not an essential album for every collection, but highly recommended.