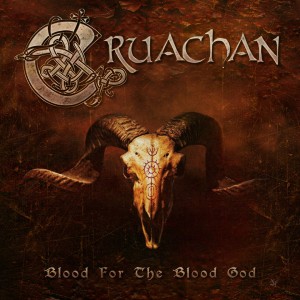 The Celts are back!

Ireland’s Cruachan have been hailed as one of the originators of folk metal, starting out way back in 1995 with their now almost legendary Tuatha Na Gael album, which had combined black metal with celtic folk. In the years to follow, the Irish went through several different style adjustments, all of them staying within the band’s context, mind you, going completely folk metal, then bringing back the black metal influences on their 2011 album Blood on the Black Robe, to now arrive at album number seven, titled Blood for the Blood God (second in their “Blood” trilogy).

And for the new album, band leader Keith Fay had announced that it would be their most aggressive and diverse album to date, so fairly big words. Blood for the Blood God is two things – almost a summary of their career so far and very, very good. While it might be arguable if the album is their most aggressive, it surely is their heaviest and most powerful, which at least, to a point, is owed to the clear and powerful production that allows their defiant hymns to shine. Drawing from their black metal roots as well as folk, and also the heavier spirit of pagan metal, Cruachan’s 2014 offering definitely is their most diverse to date, with rasps, clear vocals and some choirs, plus a few female vocals strewn in here and there, yet not as a token gimmick, but because they belong exactly where they are. 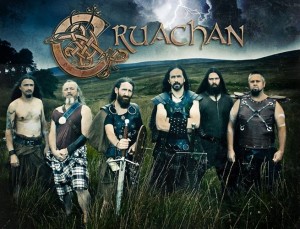 Compared to earlier efforts, the drums have more punch and form a powerful foundation to build on, with an increase in use of the double-bass by Argentine import Mauro Frison, over which the sextet draws us into the turbulent world of old Ireland. And overall there is an increased feeling of power and this Irish defiant spirit that is threading through so many of the Emerald Isle’s bands’ music, which translates well into their songs and they do not seem to be content with the status they had build for themselves, but continue to push forward, which is an admirable trait, especially when done with such passion and quality as in the case of Cruachan.

From the title track’s opening riff, Blood for the Blood God oozes this proud and typically Irish spirit, with Fay’s roughish clean vocals leading the way into battle, but amidst the power, Cruachan build in this calm and epic passage with a violin, creating a completely new set of dynamics, sending the album off to a great start. And from there the band never looks back, but engages the listener in a varied ride through mostly Irish history and mythology, adding in thrashy rhythms and blastbeats, as on “The Arrival of the Fir Bolg”, “Beren and Luthien” or “Prophecy”, but always mixing them in with folk and folk metal, cleverly changing rhythms and tempos, bringing in a great dynamic flow that will take you on a journey you will want to go on again and again.

Cruachan still are the strongest, though, when they let their folk side shine, as on the metalized version of old Irish folk song “The Marching Song of Fiach Mac Hugh” or instrumental trail blazer “Gae Bolga”, which perfectly balances the intricacy of Celtic folk with at times surprisingly heavy guitars, while “Born for War (The Rise of Brian Boru)” is an epic proclamation of king Brian Boru’s fight against the invading vikings, once more masterfully combining heroic folk metal with black metal elements.

Blood for the Blood God is the Irish’s most powerful offering to date and quite possible Cruachan’s strongest album in their already quite lengthy career. It is this organic feel and authentic package with the lyrics going hand in hand with the music, which sets the band apart from most of their peers and the conviction is palpable. Without a doubt one of the best folk metal albums of 2014 and it is good to see the band still going strong and pushing their envelope after all these years!