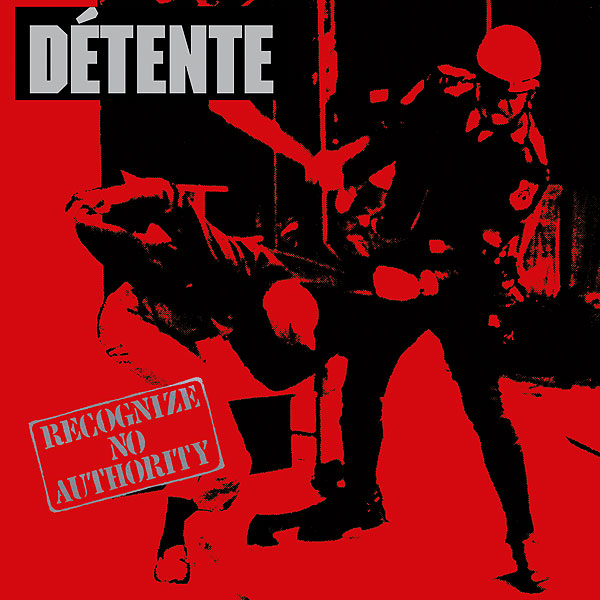 Most readers of this site will have heard of Dawn Crosby, at least you ought to have. Dawn was the charismatic vocalist with eighties heavy / thrash metallers Détente, before going on to form Fear Of God, whose sound was far more unconventional, although still unquestionably heavy. Fear Of God featured a number of former Détente members, but only one of them appeared on debut full-length, 1986’s Recognize No Authority, which has now been remastered with a second CD of additional tracks for our listening pleasure in 2015 (well, it was released in December 2014, but by the time anyone gets to listen to it…)

Sadly Dawn Crosby passed away in 1986 aged just 33. Her finest moment was arguably Fear Of God’s debut album from 1991, Within The Veil, a highly innovative metal record with fantastic songs and Ms Crosby displaying an impressive vocal range. While the music on Recognize No Authority is a lot more conventional than that release, there’s plenty to enjoy and the seeds for what would follow had clearly been sown.  Dawn’s vocals are a real feature, with more power and aggression than pretty much any other female metal singers, at least until the likes of Angela Gossow came along and shredded the rule book. While Dawn’s delivery is usually venomous and intimidating, she did have the ability to mix it up, occasionally deploying a hushed tone or a piercing shriek. Whichever style she employs, it’s always effective, showing what a great talent she was and very much missed.

Détente is defined as, “the relaxation of strained relations or tensions (as between nations)”. This seems a strange fit with the in-your-face, heavy sound and extremely aggressive vocals, unless the latter serves to intimidate those in power to lay down their arms. It’s not a voice you’d want to mess with, but Détente were more than just a vocalist; they could write a decent metal song and the guitar work was generally very strong, with some frantic solos. (The guitarists were Caleb Quinn and Ross Robinson; none of the available information on the band reveals which was the lead guitarist, possibly both?)

In terms of highlights, “Russian Roulette” has an infectious chorus and a guitar solo that is chaotic, yet thoroughly enjoyable. “It’s Your Fate” is another winner, with a long, more ordered solo. When Crosby barks, ” It’s your fate, you don’t decide”, you won’t want to argue. “Life Is Pain” has a super-catchy slower riff, with Crosby showing real character in vocals rather than just sounding like she wants to rip your face off the whole time. “Vultures in the Sky” is, in keeping with the band’s name, an anti-war protest song, with an infectious chorus and another really nice guitar solo, which is more controlled than many of the others.

There are less effective moments too, such as the guitar solo in “Holy Wars” which starts well, but Quinn or Robinson gets carried away, the solo becoming more and more frenetic and ending up sounding silly, which ultimately ruins an otherwise good song. “Catalepsy” is an average instrumental, albeit with some nice guitar leads and “Shattered Illusions” goes for aggression and power over content. “Blood I Bleed” sees Crosby showing some of the vocal range we’d see more of on Within The Veil, including a near-death metal growl, but with the exception of the sneered line, “abuse me, exploit me” (Dawn, we wouldn’t have dared) the tune is quite forgettable.

The final two tracks on the first CD were recorded in 2010 and showcase Crosby’s latest successor in Détente, Tiina Teal. Tiina does a fantastic impression of Crosby, especially in “Genocide (Catalepsy)”, which is a reworking of the earlier instrumental track with lyrics added, courtesy of Teal. It’s a good tune with a simple yet really memorable chorus as Teal barks, “genocide – oh my god”, but for some reason the excellent guitar solo from the instrumental version is replaced with a vastly inferior one, which is disappointing.

The second CD consists of demos and live tracks and as you might expect, the sound quality is sometimes poor. We get some additional Détente tracks, including (very) rough versions of some of the songs that would become Fear Of God classics such as “All That Remains” and the marvellous “Love’s Death”. The package closes with two full demo recordings from Catalepsy, another band that rose from the ashes of Détente. Basically, Crosby went one way (Fear Of God) and all of the other band members, including both Quinn and Robinson, formed Catalepsy. They persisted with female vocals, adding Veronica Ross to their ranks, who had a strong enough voice, without sounding quite as aggressive as Crosby.

Catalepsy stayed true to the uncompromising heavy metal sound of the earlier band. Their tracks are worth checking out; it’s rough, powerful eighties metal with plenty of thrash-style riffing and more nice lead guitar work. The strongest track may be “Obituary Fear”, which has a similar sound to eighties/nineties thrashers Vio-Lence, Ross even sounding like Sean Killian.

Overall, this is a good value package of quality eighties metal with some great songs and iconic vocals. Now, would someone do the decent thing and re-release Fear Of God’s debut?

JB is an ageing, overweight death and thrash metal fan, as well as enjoying various other forms of heavy metal and hard rock. Favourite bands are Bolt Thrower, Death, Testament and Orphaned Land. Has an unhealthy obsession with guitar solos, which is reflected in most of his reviews.