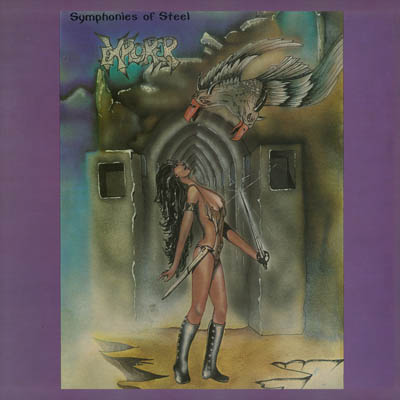 The year is 1985 and metal is on the cusp of a massive breakthrough in terms of both sales and compositional innovation. Bands like Destruction, Slayer, Helloween, Celtic Frost, Possessed, Sepultura, Fates Warning, Watchtower had begun laying down the brickwork of the more extreme, flashy, and technical forms of metal and in the two years afterwards the world would see massive steps taken forwards. However not everyone necessarily took their spots on this particular train ride to the future. Britain’s Omega, France’s Der Kaiser, Dark Wizard from the Netherlands, alongside Americans Omen, Manilla Road, and Exxplorer had all decided to travel their own particular paths. Compared to the emergent progressive, thrash, death, and black metal genres, the hallmarks of older rock and post-NWOBHM metal stylings were still easily heard. However they were not regressive in this sense as much as they were merely exploring different fields of traditional and power metal that many metal historians still unfortunately overlook today.

Exxplorer in particular played a straightforward take on classic American style power metal. They weren’t quite as barbaric and aggressive as Liege Lord, Helstar, Grifin or Savage Grace and neither were they  in the mystical domains of 70’s prog inspired complexity ruled bySlauter Xstroyes, Fates Warning, Sacred Blade, or Crimson Glory. Instead, they existed near an unusual phantom category where one can find fairly upbeat rollicking rhythms and older hard rock crunch but modified to fit into a metallic format. The earlier works of Savatage, Warrior (Los Angeles), Stormtrooper ,and Shok Paris  are the closest references to their sound. Where Exxplorer differ is that they have a bit more emphasis on the easily foot-tapped skipping rhythmic work of older British bands and their usage of power ballad songwriting formats.  It’s a fairly accessible take on the style with all things considered.

However even the relative lightweights of the American power metal movement would be muscled pulp fantasy warriors compared to their European counterparts. Exxplorer’s main tools of the trade are stalwart and generally midpaced riffs with slightly jaunty cadences and a lot of attitude. The leftover blues side of earlier metal and hard rock peeks out here and there especially when they drop into midpaced grooves but  it’s carried with a distinctly 80’s gusto . Other bands with such characteristics might trudge and amble but Exxplorer have a kind of gutsy charisma to them that avoids boring fist-pumpers and wimpy single attempts. Instead they focus on the American power metal tendency for vigorous battle-ready drive that helps to space out these comparatively mellow midpaced moments. While this style might sound a bit dated even by 1985’s standards there’s a kind of irresistible charm I find in the confident swaggering nature of a lot of their approach that for better and for worse never really caught on that much.

Songwriting wise the band are surprisingly good when they drop into clean and acoustic sections. Lennie Rizzo has a warm midrange baritone that makes me think a bit of a more reined in glam singer but he has a pretty good grasp of when to stress and hold certain notes and when to hold back. It’s during the latter points he can sound a bit distant although this never really was a problem for me. The full range of his emotional depth is most easily heard on the slow, cleanly played buildups of “Run for Tomorrow” and “World War III” along with the mellowed verses of ” Objection Overruled: a) Guilty as Charged” where he takes on an almost suggestive, sultry tone. And boy do these tracks build up well,  the former two tracks take their sweet time building up to explosive solos that never overstay their welcome and expertly paced transitions that capitalise on guitarists Kevin Kennedy and Ed LaVolpe’s skills at  laying down simple, but catchy and invigorating riffing. If there’s spots where they falter a bit, it’s for the aggressive tracks  “Exxplorer” and “Going to Hell”. They aren’t bad by any means but whereas their midpaced numbers feel bold and powerful in their comfortably paced stride, these ones feel a bit rushed by comparison. When they resort to the basic galloping and single string picking rhythms they lose the sense of weightiness of the muscular slower numbers, causing the album to feel a little lopsided.

This puts the band at kind of an odd position in which they fare well in fields that American style power metal bands usually don’t. When they try to kick it up to pseudo-speed metal territory, it’s clear they aren’t quite on the mark. These are fairly minor complaints for this mid 80’s gem and a good example of the diversity within the classic, pre keyboard-takeover days of power metal. It’s a somewhat more restrained and some might say sentimental take on the genre with all those ballady segments, but they never boil it down to walling in the saccharine. In other words, they understand the POWER part of power ballad well and when the distortion kicks in, they’ve got more than a few firm riffs to back it up. This may still not have the raw force some of us look for when we want classic. However for those who want an insight into metal prior to its great lunge forwards, this will prove to be an interesting time capsule and a solid outing of classic steel.