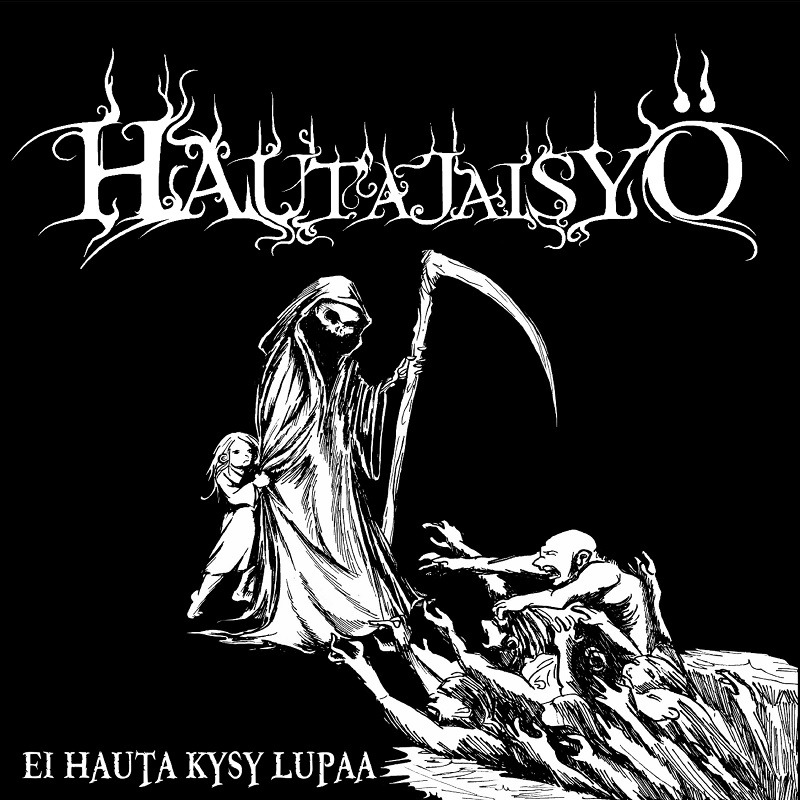 Let me be honest: my biggest bugbear about bands writing in Finnish is that everything is so hard for me to spell. For Hautajaisyö that has been the case since their current incarnation began in 2014, though interestingly they started as Redeye in 2006, under which guise they used English for their output. Involvement of the 4 bandmembers in several other Finnish language projects (black metallers Uhriristi being perhaps the most notable) backs up the deep connection with mother tongue. That suggests a specific reason for their shift in formula, only unfortunately I’m not the person to delve into the lyrics or even the album title to illuminate the meaning. I can however offer an olive branch by telling you that Hautajaisyö translates as “funeral night”. On the positive side, quite enough goes on musically for me to sink my teeth into instead, with the nice feature of J. Partanen occasionally rolling his consonants while growling to produce a seldom-seen intimate effect in otherwise combative death metal. 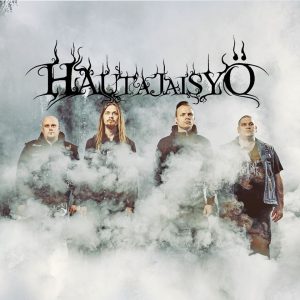 It would be simplistic yet accurate to compare Hautajaisyö to other Finnish death metal acts like Cauldron Of Hate and Revulsion, plus some of their labelmates on Inverse Records, though arguably the quartet seem more a case of streamlining worldwide deathly influences into a reasonably current sound. I detect bits of the Dutch and German scenes which often prefer bulk over pace, while the pummelling drum work on songs like “Hiljaisuuden vankila” calls to mind the furious grooves of heavier outfits like Hate Eternal and catchier ones like Amon Amarth in their early period. Little tastes of Immortal’s epic albums come through at moments too. The flattened, rounded guitar tone particularly shapes Ei hauta kysy lupaa into a bulkier form than some tremolo riffing, blasting, and slamming sections otherwise would, “Kunnes hajoan” exhibiting the contrast with alternate faster and slower sections that tend to leave the plainer riffs unornamented by vocals. This style continues for most of the 8 songs, yet with a 35 minute runtime the album never proves exhausting.

Emerging gradually as Ei hauta kysy lupaa wears on, a lack of alternate methods becomes apparent in Hautajaisyö’s armoury. Small diversions crop up, such as the moody wash of more epic riffing in “Askel”, unexpected synth and choir for the bridge of “Kärsimys”, and the lingering guitar shapes as “Lohduton” closes, but the mainstay of all the songs proves very similar. I would categorize pit-friendly riffing, physically clattering drumming, and low roars with great effort behind them as bread and butter death metal traits, and still I can’t deny that the Finns do these very well by making plenty of the riffs distinctive, rarely getting bogged down in samey rhythmic patterns, and adjusting the placement of vocals in each song. The standout tracks for me include “Kuuleeko kukaan”, which makes the most of a dominant mid-paced riff to replay it as a kind of chorus, and “Elämä lakkaa”, which hits a massively addictive thrashy pattern that lodges easily in my mind. Both techniques maximize the potential of production as heavy as an elephant sitting on your face, caring little for melody and omitting lead guitar for a full-on riff experience. 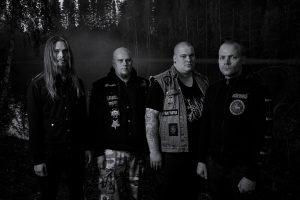 As such, Hautajaisyö aim for a fairly specific target with their fourth album, fortunately hitting it for much of Ei hauta kysy lupaa. This feels like the sort of death metal that would gain in power when played live, since the massive dose of physicality requires more than passive engagement, plus the slightly plain set-up could come across as boring on record to more adventurous metalheads. All the same, the prime requirement for this style relates to how hard it hits, and in that respect Hautajaisyö have spared no efforts to cause as much concentrated, mid-paced damage as they can. And to enjoy that, it doesn’t matter if I can’t spell any of the song titles.