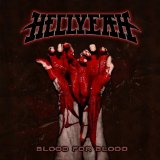 The party rockers have left the building.

For the first time EVER in my life, I found myself enjoying a Hellyeah album. When this “supergroup” first arrived on the scene, I was excited. I like Mudvayne. I like Pantera and Damageplan. The combination should be awesome, right? Even if the party anthem groove records have gotten slightly better with time, their last album Blood Brothers was the kind of record that was 90% generic filler. Going into their fourth album Blood for Blood, I was again hesitant. When the aggressive and catchy “Sangre por Sangre” kicked off though I was shocked…and the album kept going with it!

Blood for Blood is not a great record. Nah, there is still plenty of filler to be found throughout the album and if you are not a fan of groove metal then this is still going to sound pretty atrocious to you. The difference for this fourth record can be found in the ratio of filler to solid tracks and in the aggressive tendencies of the album. There are still a couple of ballad-ish tracks included like “Moth” or the super radio friendly “Hush” (which also gets an acoustic version tacked onto the end of the record), but the general quality of Hellyeah has increased pretty significantly.

One of the keys for why Blood for Blood is more successful is that Hellyeah mostly dropped the a) party rocker vibe and b) cowboys in metal bullshit. Not that there is anything wrong with those, but when your band only does those things it’s like chewing on sand for 40 minutes. Blood for Blood on the other hand feels like a proper groove metal record full of pissed off violent lyrics, catchy fist-pumping grooves, and riffs. That final element certainly took me by surprise. Hellyeah has always had very generic riffing previously so for them to cook out some catchy (occasionally thrashy) riffs made for some fun material. “Demons in the Dirt” and “Cross to Bier” come off as better than anything they have released previously simply due to the stronger riffs and more aggressive tendencies. Even Chad Gray (vocalist of Mudvayne) rarely pulls his crooning warble out except in the already mentioned ballads. Instead he digs down deep and lets out some solid screams and harsh vocals with the occasional melodic chorus thrown in for some better balancing.

Blood for Blood does contain some filler particularly towards the end and in the unmemorable ballads, but the rest is a massive step forward for the band. It’s more aggressive, the riffs are finally there, and the band dropped their ‘cowboy bro party rocker’ persona that kept creeping into their musical content. It’s still not a record for everyone and Hellyeah does have a ways to go to really capture their potential, but this is handedly their best record.