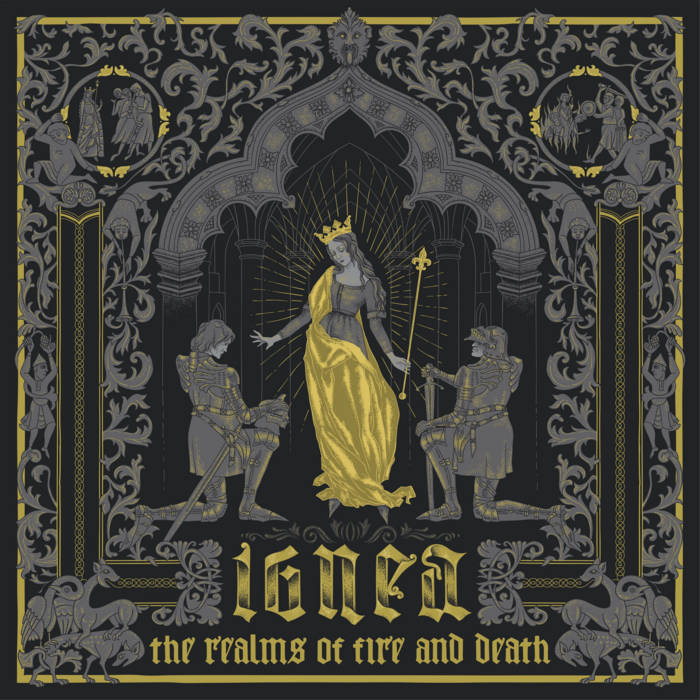 Ignea is a force to be admired. With 2 full albums, an EP and a split release with fellow Ukrainian countrymen Ersedu under their belt, and all released independently since 2016, Ignea is probably the second greatest metal powerhouse of their country after the all too famous Jinjer. Their style has its own unique niche between progressive, alternative and traditional influences from their national mythology and the middle east (at least in my humble evaluation). They are a truly unboxable (it’s a word) band, and that’s exactly what prog snobs like me like, but they are very accessible and catchy as well. Today we’re hopping aboard the DeLorean and taking a trip back to April 2020 to enjoy “The Realms of Fire and Death”, the band’s second full-length release.

Ignea’s sound is an epic combo of catchy groove riffing style with flowing soothing melodies on top and progressive flavors on the side. Opener “Queen Dies” is already a testament to the band’s super headbangable style of heavy crunching riffs with super clever drums. The guitar lines rely mostly on chugging groovy riffs and open driven harmonies, without solos. Occasional breakdowns or de-tuned riffs make appearances at times as well. The drumming is functional in nature, keeping the foundation of solid grooves going and adding what are probably some of my favorite fills and transitions in metal to spice up the songs. The bass mostly follows the guitar line but also gets the spotlight over verse sections where the guitars go silent, revealing a chunky tasty tone to behold. On top we have the atmospheres, harmonies and buzzy fuzzy (almost industrial) sound effects from the keyboard, bringing both an ethnic feel at times as well as a more electronic edge in other cases creating some super nice tensions and contrasts in the music. It also gives us a flashy over the top solo at the end of “Gods of Fire” and that’s sick.

Vocally Ignea brings the same duality of atmosphere and aggression, with a touch on ethnic feelings. Helle’s vocals alternate screaming and singing as if the two styles were meant to go together all along, despite the stark contrast between her corrosive scream and fairy tale-ish clean voice, and the band has an incredible skill at creating memorable user-friendly melodies for clean vocals. Conceptually the album tells fictitious stories that seem to be best described as “evil fairy tales”. This is much supported by the folky influence in the vocals and some instrumentals. The raw tribal percussion and middle eastern melodies that shine in the ballad “What For” as well as the heavily metalized cover of “Í tokuni” by Eivør are the best instances of this. The added bonus of a song in their native language Ukrainian (second track “Чорне полум’я” which translates as “Black Flame”), which is also offered in an English version at the end of the album is another true highlight of the album, and it also has a super sick breakdown. Overall, the lyrics and vocals are quite confrontationally poetic throughout most of the album, allowing the darker energy of the metal elements to be integrated in the concept and nature of the album.

In my estimate, Ignea’s essence stands in their capacity to make their different contrasting elements work together for the stories and feelings of the music, but to also keep everything catchy and ear-friendly from the first listen. It’s not contrast for the sake of contrast and they only create enough tension to raise an eyebrow, but never to disrupt the flow of the songs. The songs are different from each other, they connect beautifully, and there is no filler. To top it off, the production quality is staggering especially given that this album was self-released. I can only urge you to dare to enter “The Realms of Fire and Death”, and to check out Ignea on YouTube, Spotify, Bandcamp, their website and Patreon.