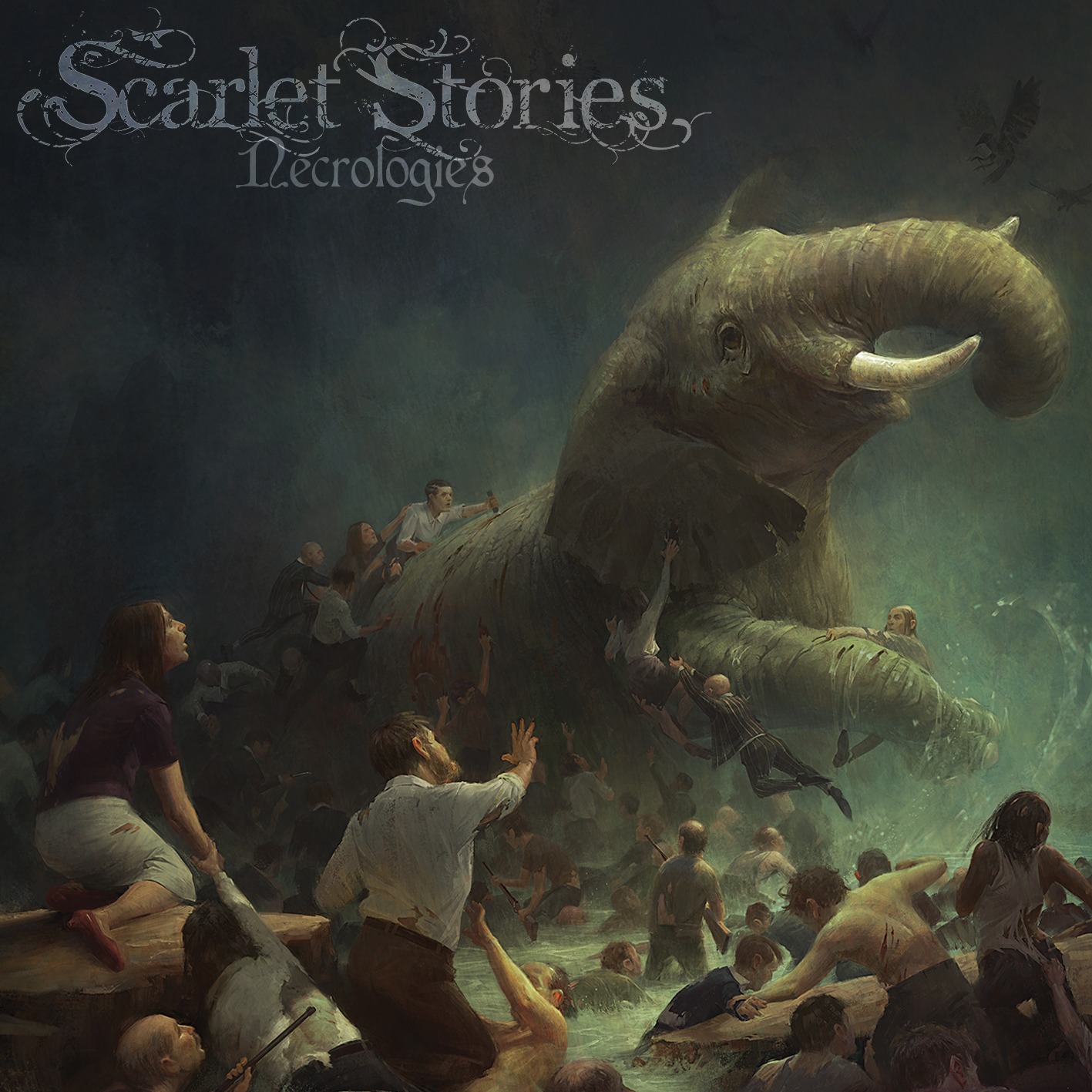 Here written are your Scarlet Stories

Hailing from Tilburg, Netherlands, Scarlet Stories started out through vocalist Lisette van den Berg and guitarist Bram te Kamp creating acoustic songs influenced by progressive music. It soon developed into a full metal band and since 2012 they have released two EP’s and are now finally releasing their first full-length album. Even though this is a debut, they are not in any way “beginners” and have a rich musical background to show off. I actually found out about the band thanks to Lisette’s participation in the Ayreon Universe live shows and the other band members have also played in other bands before. But just in case that doesn’t convince you that they know what they’re doing, a glimpse into this album certainly will.

Scarlet Stories describe their sound as dark progressive rock/metal but the music delivered on the album actually covers a very wide range of influences. There is consistent use of clean or acoustic guitar, violins, and soft, emotional vocals that create calm, atmospheric passages which don’t even fit the “metal” description and these take up a lot of the album’s run time. It is in these parts that the band displays their versatility and gives each instrument a different flavor. The bass sounds very prominent and surprisingly melodic, coming forward a lot (see the first part of “The Tell-Tale Heart”) and drummer Tim Kupper can complement the unusual sound very well, playing soft and detailed parts that prove his abilities expand beyond the metal spectrum. I feel like this affinity for atmosphere is one of the main features that makes Scarlet Stories special because oftentimes there is an evolutionary direction in the songs that allows them to build from that softness until you find yourself in a full-blown, massive, metal soundscape (songs like “Craving” and “Nostalgia of a Closed Mind” give this feel of a constant build-up from beginning to end). The composition is complex and diversified allowing for one single song to go through many stages and keep changing (“Vingt Mille Lieues Sous Les Mers” for example) but there are also songs that just sit on a few themes and don’t challenge you very much (see the more repetitive songwriting approach on “The Gallows Tree”).

There’s obviously a lot of focus on the progressive metal style, with interesting, challenging and very satisfying rhythmic patterns and transitions, that really allow the drums to shine, showing off Tim’s technical abilities as well as control and attention to detail. I feel his use of ghost notes and clever cymbal play has a big part in the band’s ability to create an atmosphere and keep the listener engaged. The heavy guitars are also challenging and quite groovy at times. It is primarily progressive but a lot of the raw guitar riffs and penetrating drum and bass sound also bring a strong, undeniable death/doom component. I swear the intro riff on “In Blood and Limbs and Gore and Clay” gave me a flashback to Swallow the Sun’s “When a Shadow is Forced Into The Light”, released in January. Even though the overall style of Scarlet Stories fits in an entirely different niche, they can still bring forth that massive, low end dragging riff style that clearly resembles doom metal. And this comparison to doom should probably hint you out that they’re not exactly keen on high tempos or positive vibes, but they still somehow made the songs flow naturally into fast, technical parts. Especially the guitar solos have this way of starting from a melodic and emotional approach and evolving into face-melting shreds. The drums will also throw in some impactful double kicks. Even though the music is very eclectic and somewhat intellectual, there are many parts where it will satisfy those who just want metal, in the sense that it can build up to some properly heavy, massive sounding moments and also deliver a remarkably tasty chug.

However, I feel that the essence of Scarlet Stories isn’t either in the metal elements or in the compositional variety as much as it is in the passionate and powerful delivery of emotion that comes both from the vocals and the instrumentals. I’m getting the feeling that the merging of genres wasn’t exactly “the goal” of this album as much as it was a tool to properly convey the intended feelings. From the intro, it already sounds unusual, starting out with a spoken verse and chanting which gives a bit of a story telling or soundtrack tinge and a mystical, mysterious sort of vibe that really grabs you, building curiosity and anticipation as to what might come next. And I feel this persists throughout the record a bit like watching a very captivating movie that you can’t really interrupt because you want to know what happens next and how it ends. Even though each song is a great listen on its own and has a bit of a unique touch that sets it apart, they all somehow feel connected by a somewhat similar vibe and being placed between the “Prologue: Scarlet Stories” and “Epilogue: Necrologies” binds them together as pieces of a bigger picture. There’s also a sense of everything coming together that appears when you notice the lyrical reprise from the intro in the album closer. I always love it when that is done well.

The concept of Necrologies is in short “a tribute to all animals and humans who suffered or died by the greed of others” according to Lisette van den Berg who also wrote all the lyrics for Scarlet Stories. And when you consider that, it only makes sense that the album should feel as sad as it does. It is dark, tragic and slightly sinister at times but also brings some peaceful, beautiful moments. There’s an amazing contrast of raw, heavy elements and a soft, gentle or emotional coating of vocals, violin (which often feels pulled straight out of classical music), samples or echo/delay effects on guitar that gives a sort of surround sound (listen in headphones) and makes it all so hypnotic. And at this point it’s time to get into the vocals which as everything with Scarlet Stories, are just so different. I love the delivery just as much as the approach of putting voices in the songs because unlike most bands, Lisette’s participation isn’t only in the role of “the singer”. Apart from her lead vocal performance (which is killer by the way) there’s this constant use of backing vocals, chanting, layering of different singing styles, whispers or narration that makes her voice not only the centerpiece of their soundscape but also an integral part of the band’s sound, merging with the instruments and participating in bringing that immersive atmosphere to life and giving it a persona. There’s also this unreal twist she pulls off that she somehow manages to sound a bit childish and innocent but with a slightly creepy underlying personality. The first two verses in “Vingt Mille Lieues Sous Les Mers” should show you what I’m on about. That shit really gets under my skin! And when she releases her full range and volume, backed up by that massive guitar sound, it just makes the songs sound epic! To top it all off, there’s even a scream at the end of “Nostalgia in a Closed Mind”. Wait for it! You’re not ready!

Now good music needs good sound quality in order to truly shine! “Necrologies” was recorded, engineered and produced by Joost van den Broek and Jos Driessen at Sandlane Recording Facilities and after doing some research I’ve come to realize they are responsible for the excellent studio sound of many bands that I really enjoy like Epica, Ayreon, Ex Libris, Vuur, The Gentle Storm, Stream of Passion, Mayan, Xandria, and now, Scarlet Stories. Need I say more? This album sounds fantastic! It is loaded with professionalism and leaks quality from every note. Even though through some of the doomier tracks (“In Blood and Limbs and Gore and Clay”, “Craving”, “Dust”) it got a bit monotonous for my taste, I thoroughly enjoyed it all the way through. “Necrologies” is set to be released on the 19th of September and it will be celebrated with an album release show at Willem-twee in Den Bosch, Netherlands. If by any chance you are in the area, I think this is an event you do not want to miss. Either way, give the album a spin. It’s so worth it!