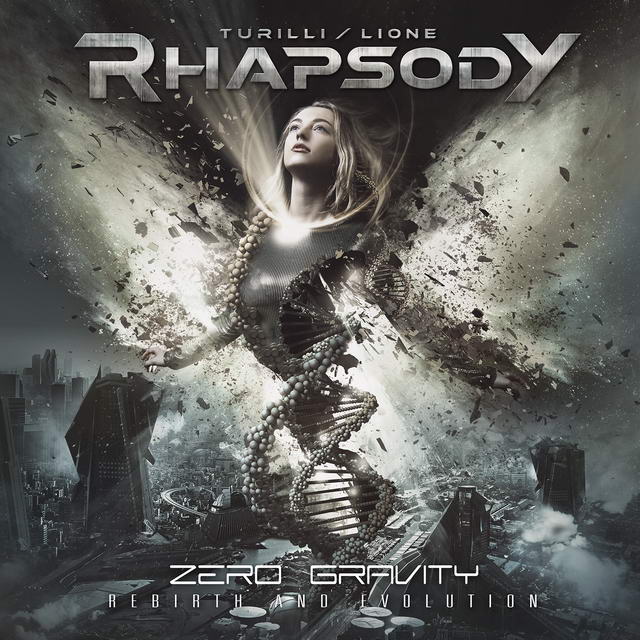 Right, time to get the list out again: Rhapsody, Rhapsody Of Fire, Luca Turilli, Luca Turilli’s Rhapsody, Luca Turilli’s Dreamquest, Rhapsody Reunion…and now: Turilli/Lione Rhapsody. Is that it? Are we done? Thank fuck. The inflated farce that is the once-glorious Rhapsody name might be putting some old fans, and definitely newcomers, off listening to the actual music. After all, no one enjoys over-complications. But I’ve ranted about this situation enough, you can read about it in my other Rhapsody-related reviews – on to this year’s releases…

Alex Staropoli’s Rhapsody Of Fire made a decent impact back in February with The Eighth Mountain. Turilli’s absence was still felt, but that was to be expected. So the Italian guitar god reunites with original Rhapsody vocalist and power metal icon Fabio Lione, hot off the heels of a great Angra album, to create Zero Gravity: Rebirth & Evolution – a symphonic power metal record like no other. It builds on that trademark neo-classical-meets-electro sound that is so undeniably Luca Turilli. But this time – perhaps it is Lione’s influence – that peculiar fusion is pushed even further. The synths and electronic backbeats are more integral to the songwriting, and the purely classical segments are so lavish and untainted. Take the bouncy “D.N.A.” which, without guitars, would pass for a more lively ’80s synthwave number. Then compare it with the luscious “Amata Immortale” which wouldn’t sound out of place in a renaissance movie soundtrack. Whether this is up your street or not, you cannot deny this is at least intriguing and unique.

As expected, the production quality is stellar. Despite containing dozens upon dozens of layers of symphonics and synths (not to mention, obviously, a metal band), absolutely everything is clear as day. And when music is as cleverly structured as this, it really needs to be. The one striking difference between this and other Turilli projects like Ascending To Infinity is the hefty guitar tone. This is undoubtedly the heaviest a Rhapsody album has ever sounded. The weighty chugs behind “I Am” are notable, but the furious “Fast Radio Burst” utterly confirms it. What a massive sound! Even for a Rhapsody release. And that’s before we get to the finale “Arcanum” with its colossal choirs. Having both Luca and Fabio as producers was a wise decision, and benefits this record greatly.

This is a difficult album to get your head around due to the sheer amount of layering and complex songwriting techniques. I was initially disappointed at how many of the melodies and riffs went completely over my head and how nothing was sinking in. But many repeated listens reveal the bountiful rewards. The instant hits like “D.N.A” and “Phoenix Rising” will keep you coming back, then put the effort in and let this album’s one-of-a-kind atmosphere engulf you. You’ll be easily hypnotized by Lione’s iconic voice anyway! How does this man sound this good almost 25 years into his career!? Turilli’s lead guitar work is also, as usual, phenomenal. These are some of his most interesting solos because they don’t simply rely on the western classical tradition. The middle section, and subsequent guitar solo, on “I Am” displays these two titans at their absolute best.

Opener “Phoenix Rising” is one of those immediately legendary Rhapsody tracks, powering out of the speakers with a chorus that manages to be catchy without treating the audience like morons. “Decoding The Multiverse” and “Multidimensional” follow suit, making the most of that splendid electro-power metal timbre. Alright, we could’ve done without the Josh Groban cover at the end, but “Arcanum” definitely ensures things end on the most gigantic note possible. Lyrical themes have been directed more towards the mathematics/geometry/coding topics that Turilli has been favouring in recent years, but that only enhances the complex atmosphere of this album. Zero Gravity is a fresh new direction for the Rhapsody name to take, and it’s just a basic pleasure to have the almost-original Rhapsody crew together again (yes, I wouldn’t dare forget about Holzwarth and Guers!). Complex and difficult, but majestic and rewarding. This is well worth your time, and just about pips The Eighth Mountain.

Larry is a musician from Pembrokeshire, South West Wales. After being brought up on metal from birth (his father's taste in the avantgarde, heavy, and just plain weird was not hidden from him!), he now lives his life vicariously through the metal community. All sub-genres. Yes even nu metal. Sue him.