Hailing from Latvia, Varang Nord technically only exist since 2014, but a closer look reveals that half the band had been in a band called Балагуры (Balagury, or Jokers) from 2004-2008. That a slavic band has chosen folk/viking metal as their weapon hardly comes as a surprise, since it is an extremely fertile breeding ground and Latvia of course is also the home of the mighty Skyforger, one of pagan metal’s most unsung heroes. 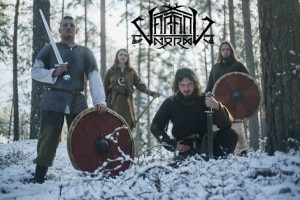 Varang Nord’s debut EP Fire of the North originally had been released late 2014, but now Metal Scrap Records took it upon themselves to help the quartet to bring their creations to a wider audience. The folk/viking metal scene is one of the most competitive out there, with a lot of bands trying to get at least some crumbs of the cake, no matter where their influences are coming from. In the Latvians’ case the foundation are solid heavy guitars, a gruff voice, an accordion and some accentuating keyboard melodies that bring in the playfulness.

Opener “Дикая охота” (“Wild Hunt”) kind of opposes its title by starting things off as a powerful mid-tempo track, but the folk metal energy comes through on “Эля мужики налили” (“As Men Poured Ale”), which is a jaunty romp through the genre, complete with accordion and what sounds like a choir of ale-loving gentlemen, which doesn’t bring anything new to the table, but is highly entertaining. Some may claim that Amon Amarth might not be completely unknown to these guys and listening to the opening of the excellent “Жертва старым богам” (“Sacrifice for the Old Gods”), one would be very hard pressed not to agree, because the pounding rhythm and gruff vocal delivery do bear some resemblances to the Swedish forerunners of the viking death metal niche, but to put Varang Nord down as a clone would be far-fetched, since the accordion brings in a touch of their own and especially the use of the choir to complement Maxim Popov’s growls works very much in the band’s favour, as “Кровь за кровь” (“Blood for Blood”) proves.

It is refreshing that Varang Nord don’t follow the lead of many other comparable bands from the former Soviet Union by bringing their slavic heritage into their music, but taken on an almost Nordic approach. A good debut EP that bodes well for the Latvians’ future and with some more work and experience they might be able to grow into a veritable force to fight alongside Skyforger…