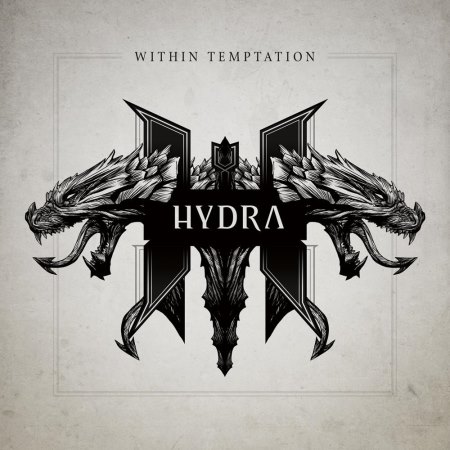 Liking the older version of Within Temptation, the one that was quite becoming of the late 90s transition out of the fatalistic wailings of the death/doom era into something more friendly with mainline audiences, while also embracing the newer incarnation that might be a bit too accessible for some is no small task, but it is very much possible. Their adoption of a more rocking yet still dark sound on The Silent Force came just a tad close for comfort given the recent success of Evanescence (to speak nothing for the similarity in sound), but it was a commendable studio effort, and their new style has held up for the most part as their sixth LP Hydra rears its multiple heads, albeit with some unnecessary hiccups.

The most auspicious aspect of this album, in contrast to its recent predecessors, circles around a slight overuse of guest vocal slots and an extremely odd selection of characters to complement the ensemble. On the one hand, the introduction of ex-Nightwish vocalist Tarja Turunen is quite a welcome addition that provides an impressive operatic foil to Sharon Den Adel’s lighter, angelic melodies. A single listen to “Paradise (What About Us?)” will no doubt float the idea of continued collaborations between these two lovely voices in the future. Likewise, while Howard Jones may not be the most loved figure in the metal world, his melodramatic high baritone wails fit in nicely with the heavier character that this band occasionally throws out alongside their generally balladic tendencies.

But as with many things, this album’s defining point also proves to be its weak spot. While it’s a stretch to label any single song on this album as terrible, the inclusion of hip hop artist Xzibit pretty well throws a fairly convention song in “And We Run” into chaos and will no doubt turn off anyone annoyed with the continual encroachment of MTV culture into metal music. And while a bit less overt of a clashing presence, Dave Pirner’s contribution to this album on the closing song “The Whole World Is Watching” comes off as unnecessary window-dressing, to speak nothing for his nonchalant rasps being in the same record as the impresarios of the caliber of the rest of the vocal company being kept.

Nevertheless, from an overall stylistic standpoint, Hydra does offer a sufficient dose of the same winning formula that brought out The Unforgiving to alleviate the handful of puzzling choices in a supporting cast. If anything, this listens closer to the previous album than otherwise, drawing upon a charming if formulaic mixture of minimalist guitar riffs and film score inspired symphonic atmospheres. Sometimes things are a bit more driving and intense, while at others things take on a restful, ambient character, but the beautiful allure of the Within Temptation brand remains a constant. It’s far from the best thing this band has put out, but barring a few questionable fits of unnecessary experimentation, it gets the job done.

Jonathan is the reclusive TMO jack-of-all-trades, or at least he tries to be.