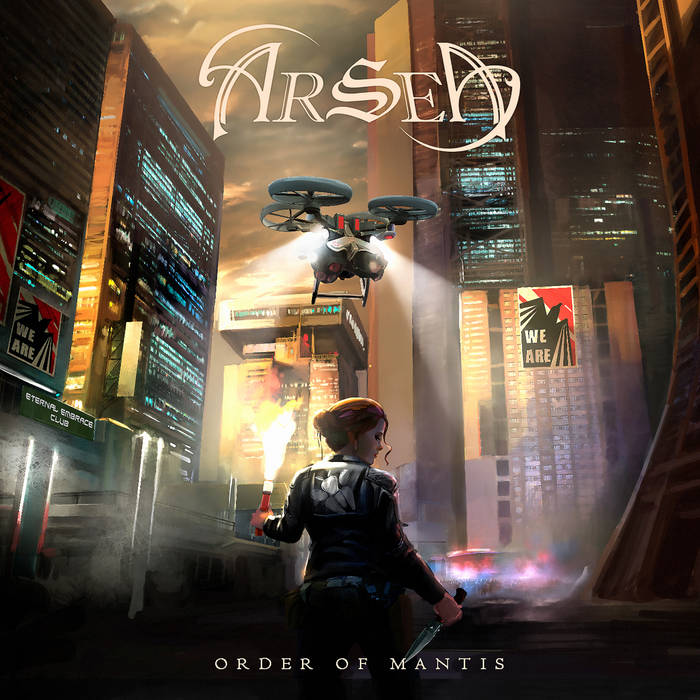 Hailing from Lazio, Italy, ArseA is a force of the underground prog power scene that has only recently reached my ears. With 7 years since their previous release, this sextet is surely one to let ideas boil and grow before they are served to the public, and in the case of the new release “Order of Mantis”, the time invested is tangible. It’s a record that above all feels refined and balanced, and despite the near one hour runtime it seemed to fly by.

This band is not shock value, yet not pretentious intellectuals either, at least not from a musical perspective, and since the lyrics are not yet available, the music is all we will be looking at here. As someone who doesn’t much fancy power metal I could scoff at the galloping riffs and somewhat unidimensional style of the vocals, but ArseA do a good job of keeping an interesting flow to their songs, while also not needing too many kinder eggs to keep your attention. In fact the best quality of this album in my view is just how easily it creates an easy, somewhat cozy and immersive atmosphere that you can easily sink into. Despite that it’s not free of energy or deeper emotions, and an overall melancholic feeling seems to permeate the record.

To get into the intricacies, ArseA strongly reminds of the likes of Evergrey or Circus Maximus, and in fact Tom Englund of Evergrey is even featured on the last song titled “Unfair”. The songs seem to develop around a balanced recipe combining galloping energetic parts most commonly in the verses, and strong harmonious choruses, as well as groovy headbang-worthy sections. Guitar tones are warm and clear, allowing both guitars to be heard, and the natural flow of the music is occasionally tampered for the sake of rhythmic intricacy. The drums play a big part in that, and the capacity for the drums to hold a backbone but also add color and dynamic to the music cannot be undervalued. It might actually be this detail that saves ArseA from being just another power metal band. Not to say that the rest of the music is lacking, but the melodies and harmonies have more impact when built on top of a strong foundation. And all the details are integrated into an overall sense of harmony. Despite my previous point, the drums don’t lead. The harmonies seem to be the focal point of the songwriting. That is also where the keyboard is most highly valued, as we get a wide variety of piano and organ tones filling up the space. More subdued atmospheric bridges find their way into the music as well, and even bass lead snippets that either shine on their own or peek out of the soundscape.

Vocally the album is quite strong as well! Matteo’s vocals remind strongly of Evergrey’s Tom Englund, Damian Wilson, Russel Allen, and maybe even Zaher Zorgati of Myrath, though only in terms of vocal tone for the last one. Vocals are mostly mid-range with a bit of a gritty edge and some rich layering as well to feed back into that all too important harmony.

Overall ArseA created a record that is simply too easy to listen to and get immersed into. It’s no shocker or record breaker, but it just works for what it needs to be, and with all the time invested into it, you can’t help but feel like this is some old fine wine in audio format. Check out Order of Mantis at YouTube, Spotify or Bandcamp!