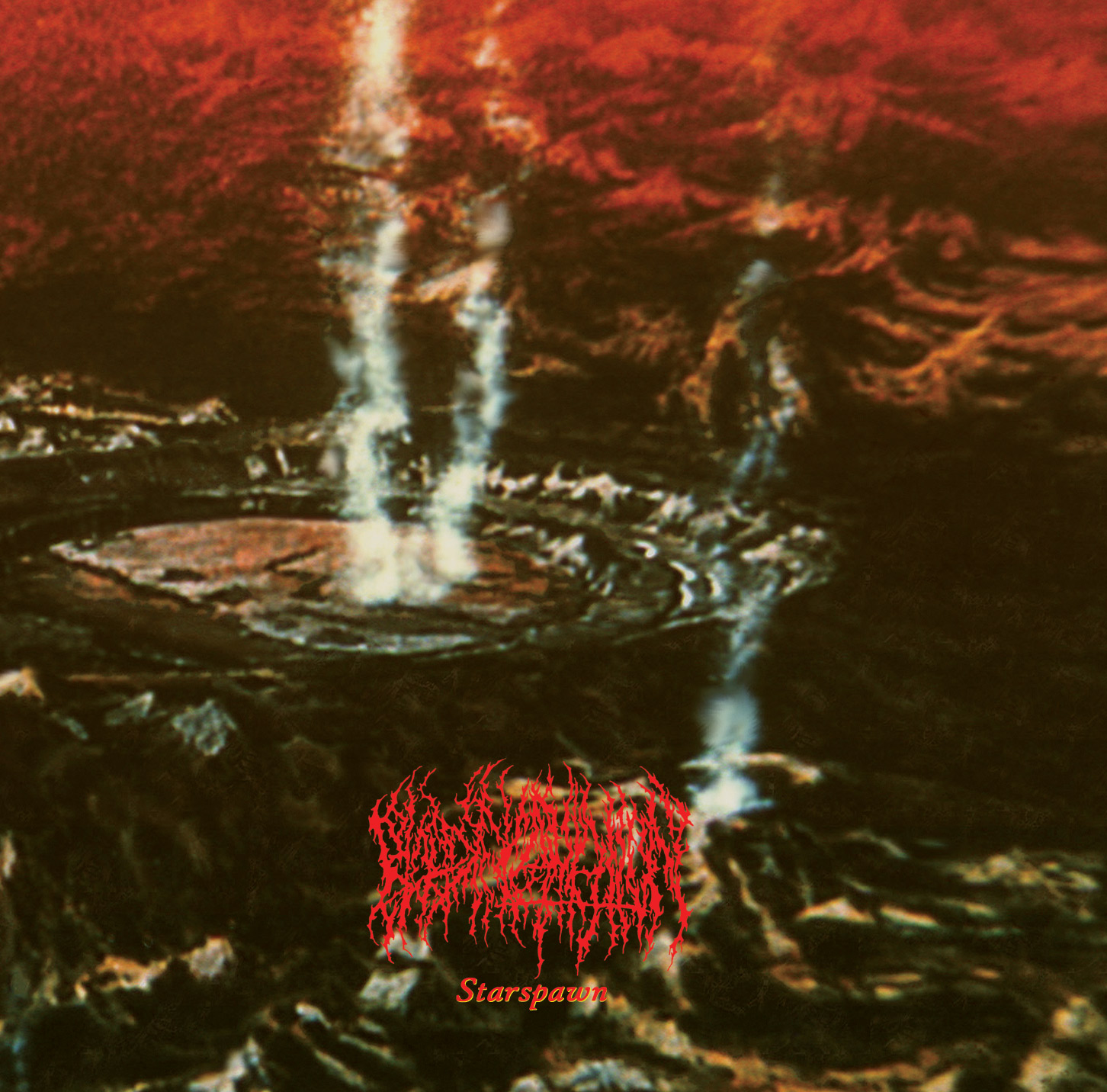 Somewhere in Denver, Colorado a group of extradimensional travellers landed five years ago after having observed the state of death metal from their listening probes embedded in our lower atmosphere. Aware of the changing tastes and musical trends both established and obscure, they began to gestate and spawn a collection of demos along with an EP and a split with Spectral Voice. An underlying set of characteristics emerged with each one that grew clearer in spite of the frequent re-recordings and an otherworldly sound that was vast and forbidding as the black depths of space yet inscribed with esoteric markings and coordinated by forces supernatural in their precision. This year, the final stage of this conscious evolution was reached and Blood Incantation have produced Starspawn.

Where this album stands in relation to death metal today is hard to determine but some have used the terms such as progressive, technical, atmospheric, ambient, and funeral. For some these may be tiresome but are not necessarily off mark. However they do focus on specific facets of their sound rather than the whole picture. Refined musicianship is a central part of the album, understated and playing towards the progression of compositions as opposed to self-indulgence and colourfulness, and the band demonstrate familiarity with forms both ancient and contemporary. It is however the calculated execution towards the lengthening of phrase, the careful elaboration on siren-like melody, and sudden busied motions that contribute a great deal to its varied sonic landscapes and varied moods. All six of the songs go for an approach focusing on longer streams of theme arranged in labyrinthine forms that journey across spaces both jagged and vast, displaying a great deal of content yet with a careful ear towards how they build off of and unify one another in the service of an overarching aim. The easiest explanation for what they are would be the phantom category of adventurous bands such as Garroted, Ghoulgotha, Zealotry, and StarGazer who have created from elements familiar a sound that exists outside of the major movements of today. Even then, it is still a very nebulous grouping at best.

It does not take much time, even on the shorter songs, to see that Blood Incantation use quite a few riffs per track. These tracks have a level of complexity and thoroughness in execution that rivals Timeghoul, Alf Svensson’s At The Gates, and The Chasm in their emphasis on using devilish details to paint larger, over-arching columns of theme and progression. Compared to much of the genre a wider range of tone is used to communicate this alien grandeur with the band working through a cyclonic void of instrumentation, all of which surround a central guiding idea outlined in a track’s opening movements. Both guitarists home in on a particular set of tonal coordinates but carefully diverge at key moments with subtle counterpoint, exploring a wide range of possibilities across the scales. Gradually voyaging outwards on slithering worm-like motions, riffs are filtered through segments of self-examination and mutation where they cycle and through and touch on particular facets their own construction, altering note placement and phrasing to draw out their full usage. Each section expands into succeeding iterations often with overlaid leads capitalizing on buildup and summarizing intent to segue into increasingly more aberrant and tense forms, resulting in a consistent transfer of motion. All of these threads of development converge on slower, procession-like doom-dirges that settle and resolve preceding tensions and bring the songs to a severe, crushing sense of death-like closure.

All across the board each musician is cognizant of the role they play but while not technical in the way typically associated with that term, showcases careful application of their capacities. Paul Riedl and Morris Kolontyrsky pick a wide variety of riffs to both centre songs and deform any sense of comforting repetition. Denser chords stab and dig in arrangements of sharp, semi-alien geometry providing a network through which off-tone lead hydras twist and flail, exploring the spaciousness implied by their impeccably written patterns. Much of it frequently bends or twists with more accessible rhythmically referencing strum being used sparingly, letting most of it rest on tendril-like upper-register playing, sometimes melodic and sometimes almost Voivod-like in the ways they subtly bend and contort themselves. On top of that, they unleash some impressive solos that violently climax segments and display an interesting style somewhere between Trey Azathoth’s string-bending sorcery and the metalized fusion tendencies of classic Atheist. Jeff Barrett’s fretless bass can be a little hard to make out in the subdued production but like some alien observer recording his research, his lines quietly examine the murky lower end and annotate these perplexing motions. His work is by far the subtlest but it plays a vital role in keeping the riffs punchy and directed. Finally we have Isaac Faulk with a style I’d call “compact” to make it concise. He touches on some of the active arachnid-like flexibility that pervades death metal’s upper echelons but his strength are his short, snappy fills and tasteful accents that skillfully play into the wave-like motions of the songs. It might be relatively low-key compared to say, Ghoulgotha’s Charlie Koryn or Zealotry’s Alex Zalatan but his timing and careful choices in approach give him a distinct identity that fits this album perfectly.

If this album has flaws, it’s that the production feels a little muffled and subdued and that there are only six songs, one of which is a cool although not really mind-blowing ambient interlude. However with a 13 minute monstrous opener and a nearly seven minute epic not too long after, some might say that’s been covered well. In its meticulousness and attention to detail yet simultaneous awareness of how smaller pieces reveal an encompassing narrative, Starspawn creates an album that communicates the kind of abstract, inhuman horror that we have been attracted to since we first looked towards the night sky with doubt and uncertainty. Yet it never really feels stereotypically Lovecraftian, forging its own mythos of alien mysticism and cryptic recollections by otherworldly observers. As death metal begins to settle into comfortable patterns across its stylistic plethora, Blood Incantation isn’t a breath of fresh air but a new compelling vision of possibilities that were left behind and forgotten in the past but now are becoming more visible and plausible with the increasing knowledge of death metal’s musicians.