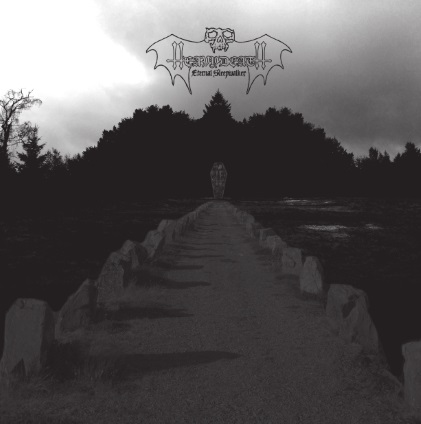 Formed in 2013, Heavydeath is a Swedish doom/death metal band with a penchant for releasing demos. In typical bedroom black metal style, the band released ten demos, plus a compilation, single and EP in 2014 alone. I guess the constant barrage of demos prepared them for their debut album, Eternal Sleepwalker, which was released in March of 2015 through Svart Records.

The CD version features seven tracks of plodding, lowbrow doom metal with some deep, death metal growls. The riffing is pretty Sabbathian in nature, sticking with either a slow moving crunch or head bobbing pulses for most of the album. There are a few times when things get faster, like the ending of “Ascension”, which just takes the same riff and speeds up the tempo a bit, but most of the album flies by pretty unremarkably. The riffs are heavy, I guess, and the vocals are pretty menacing, but the band really doesn’t seem to be trying, at all. It’s not interesting, it’s not enjoyable; it’s just kind of there. Apart from a few moments when they ramp up the speed and approach something that resembles songwriting, Eternal Sleepwalker is utterly flaccid.

The saddest part is that the lineup boasts some pretty hefty names, with members who spent time in Runemagick, The Project Hate and Necrocurse, to name a few. Nicklas Rudolfsson’s back catalog is chock full of stellar material, but, damn, this is boring. I guess there’s an audience for it, but I’m not really sure how many people are into really boring, plodding doom metal with death metal growls. It’s not offensive or annoying, it just does its thing in an extremely forgettable way.