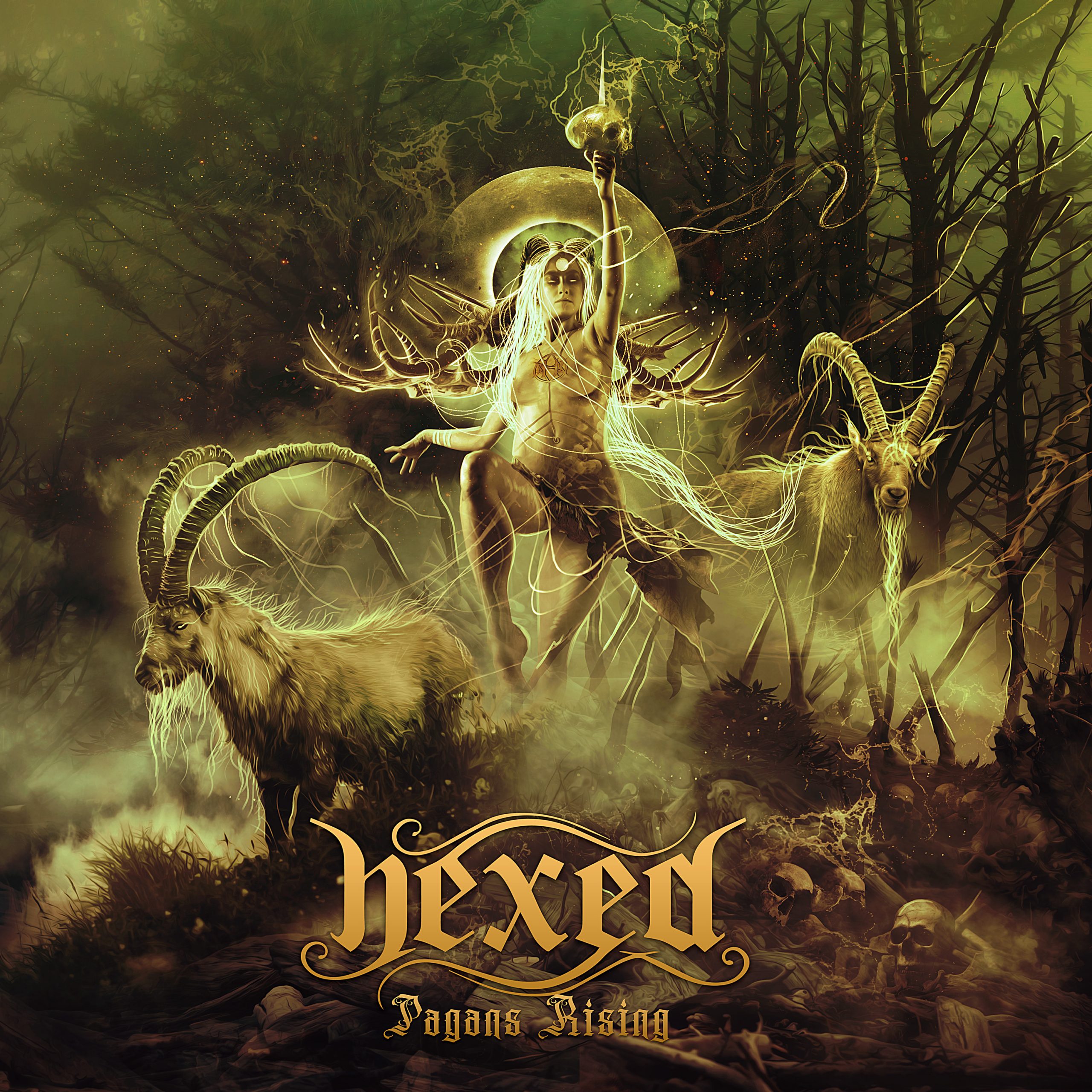 Formed in late 2015 by vocalist Tina Gunnarsson and guitarist Stellan Gunnarsson, Swedish symphonic metal band Hexed are releasing Pagans Rising, their second full-length album, coming four years after their debut Netherworld. The new album was recorded with a slightly different line-up relative to the debut. Drummer Teddy Möller is replaced here by former Nocean stickman Patrick Wahlberg, and David Nyman is added as second guitarist to complement the lead work by Stellan Gunnarsson. The line-up is completed by bassist Daniel Håkansson who had already played on Netherworld.

The first thing that stood out for me when I listened to Pagans Rising is Tina Gunnarsson’s awesome vocal delivery. Female fronted symphonic metal bands inevitably draw comparisons with the stalwart acts in the genre, like Epica, Delain, Nightwish and Within Temptation. Tina’s voice, however, packs a ton of more grit and raw power compared to your traditional symphonic metal act. Her vocals and the busy, heavier-than-usual instrumental background push instead Hexed’s sound into a different direction, halfway between the bombastic power metal of Kamelot and the dark progressive musings of Evergrey. The use of growls in a handful of songs (provided by Stellan Gunnarsson) add another dimension of heaviness, and the alternation of growls and powerful female vocals reminds me of Dutch band After Forever.

I mentioned the busy, intricate instrumental arrangements in the previous paragraph: these, alas, prove to be more a course than a blessing for the album. I can see what Hexed were trying to do here: build an impressive wall of sound, intertwining high-octane guitar riffs and leads with bombastic orchestral arrangements and busy rhythmic patterns. This is a template that is frequently used in modern progressive metal productions – Evergrey being a case in point. However, the truth is that there is a very fine line between busy, bombastic arrangements that are stirring, adrenaline-pumping and awe-inspiring, and those that are instead just a complete mess. On Pagans Rising, Hexed aimed for the former, but veer dangerously close to the latter. The album’s texture is extremely dense, with guitar and keyboards constantly competing for the same sonic space, while Wahlberg’s hyperactive drumming adds layer upon layer of drum fills and grooves. Tina’s vocals (and sometimes Stellan’s growls) are layered on top of this and, frankly I feel sorry for her, busting her lungs out to make her voice emerge from the sonic maelstrom that goes on in the background. It is too much to take in and by the time I reach the album’s midpoint a strong sense of listening fatigue has set in.

It is a pity because some of the melodic ideas that emerge throughout the tracklist are quite good, balancing power and melancholy in a way that is memorable and accessible, without being trite and banal. “Resurrection”, for example, is a great song, propelled by a fast verse that mellows down in the epic chorus, where Tina sings one of the most powerful melodies of the album. “Stigma Diaboli” is also quite interesting, with its slow build towards that gorgeous symphonic chorus. “Incantation” and “Moorfield” feature good melodies too, whereas things get a bit duller elsewhere, especially in the album’s second half.

Overall, Pagans Rising feels a bit like a missed opportunity. Hexed have a good drive to write dark, powerful symphonic metal with progressive accents. But being progressive does not necessarily mean that one has to fill every second of the album with frenetic arrangements and rhythmic patterns. Music needs space to breathe and more is not always more, not even in the extravagant world of progressive metal. Hexed are however undeniably talented, and if they manage to write songs with more refined arrangements and better dynamics, they could become a compelling voice in the metal music scene.