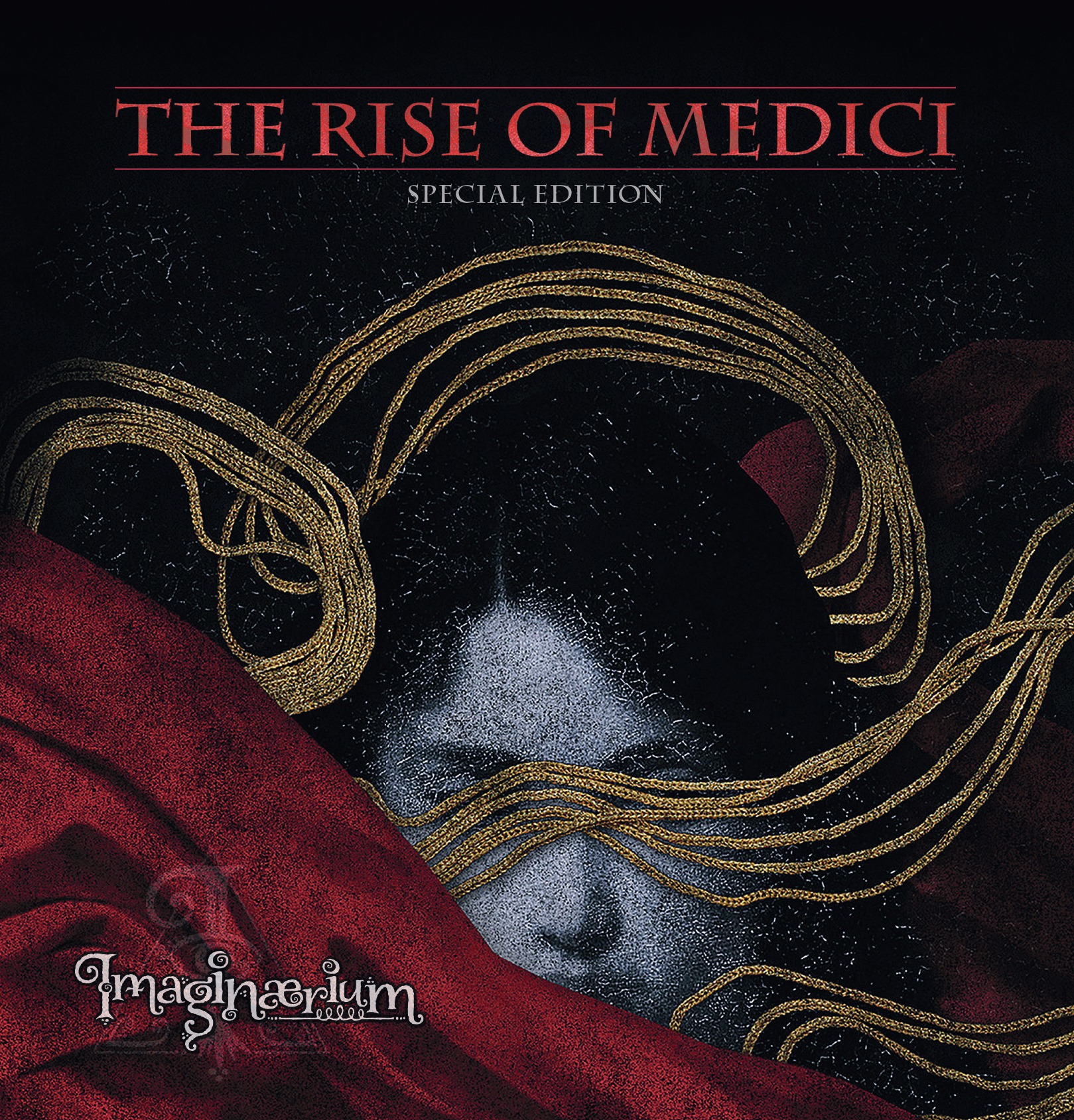 September 2022 must be the month of historical rock operas. Last week I enjoyed the fantastic return of Banco del Mutuo Soccorso with their new LP Orlando – a concept album centered on the XVI-century epic poem Orlando Furioso by Ludovico Ariosto (you can find my review here). The time-traveling continues this week with Imaginaerium and their new album The Rise of Medici, which brings us to XV-century Florence, Italy, where we learn the story of the House of Medici, one of the most powerful political families in Italian Renaissance. The band was put together by Italian singer Laura Piazzai and two well-known figures in the progressive rock scene, Eric Bouillette and Clive Nolan. Eric, who sadly passed away just a few weeks ago, was a guitar and violin player who performed in a number of UK and French prog rock/metal bands over the years, including Nine Skies, The Room and Solace Supplice. Clive is mostly known as the keyboard player for Pendragon and Arena, but in recent years he has also composed a variety of musicals and rock operas (Alchemy and Caamora’s She). In Imaginaerium, the duo is joined by a score of support musicians, including harpist Isabella Cambini, drummer Scott Higham, bass player Bernard Hery and vocalists Elena Vladyuk, Andy Sears and Mark Spencer.

Musically, The Rise of Medici follows the tradition of musicals and theatre productions. The spotlight is on the vocal melodies and the interplay between the different singers, each taking on a specific role in the Medici saga told throughout the record. The three main interpreters are Laura Piazzai, Andy Sears and Clive Nolan. Laura and Andy take on the role of Contessina and Cosimo de’ Medici respectively, while Clive interprets the couple’s political adversary, Rinaldo degli Albizzi. The story dwells on the political clashes between Cosimo and Rinaldo, which first led to the exile of the former, then eventually to his triumphant return and Rinaldo’s definitive exile and demise. The blending of the different voices is masterful. Laura Piazzai is a superb rock singer, with a great range and lots of grit and character in her voice. She can soar one moment and floor you with a powerful scream the next. Andy Sears (who formerly sang in iconic neo-prog band Twelfth Night) is an incredibly charismatic tenor. His performance is full of pathos, and goosebumps are guaranteed on his beautiful solo piece “Will I Never Return?”. Meanwhile, Clive Nolan perfectly fits in the role of the villain with his harsh hard rock voice that at times borders to the metal end of the spectrum. The two remaining singers (Elena Vladyuk and Mark Spencer) act more in a supporting role, but are no less special. Elena is a graceful soprano who takes on the role of narrator in the album’s prologue and interludes. Her delicate voice is a perfect match for these mostly acoustic parts that give the listener some respite from the bombastic and dramatic episodes of the rest of the album. Mark’s bass voice is instead used to construct some moody Latin choirs that are often performed in interplay with Elena’s soprano vocals, creating a vivid contrast between the two ends of the vocal spectrum.

Composers Clive Nolan and Eric Bouillette put a lot of effort into writing and arranging the vocal melodies, and this certainly pays off. There is plenty of great vocal hooks throughout the album and many interesting duets, where the singers swap vocal melodies and play off one another in theatrical fashion. The melodies are constructed to explore a whole gamut of moods, from opulent grandeur to dramatic urgency, weaving a rich and colorful sonic tapestry that offers satisfying variation in emotional expression. The instrumental background is mostly arranged to play a supporting role and rarely steals the scene from the vocal performances. Guitar and keyboard solos are used seldom and kept sweet and short. The core of the instrumentation is comprised of acoustic instruments (harp, violin, and mandolin) and virtual orchestration, keeping the album close to the Renaissance and symphonic rock camp. However, there are also frequent bursts of electric aggression, which are deployed in a strategic way through the course of a song to achieve dramatic effect. The combination of delicate symphonic arrangements and swift shifts to hard rock grittiness is indeed one of the main strengths of the album.

The Rise of Medici is best appreciated as an immersive experience, listening to its 12 songs in one sitting and closely following the lyrics printed in the beautiful booklet that accompany the record’s lush physical release. The whole is truly more than the sum of its parts in this case. Songs like “Glass Throne”, “Will I Never Return?” and “Fortunes Reverse” are beautiful, but not in the way that grabs you by the throat and demands immediate attention. Their beauty is subdued and lies in the way they successfully build on the narrative tension created by the preceding songs to bring the album to a satisfying climax. To some this may be a limit, in the sense that The Rise of Medici requires patience and time investment to be fully appreciated. On the other hand, there is plenty to gain from repeated listens here, so this is not an album that will quickly lose your interest and get forgotten.

With The Rise of Medici, Imaginaerium have managed to create a portentous rock opera that has plenty of depth and gracefully captures the contrast between violence and nobility that characterized the historical era the album focuses on. The album will appeal to readers who appreciate symphonic hard rock musical operas, such as Nikolo Kotzev’s Nostradamus or Trans-Siberian Orchestra’s output, as well as prog rock aficionados more generally, especially those who are partial to the neo-prog brand of the genre.