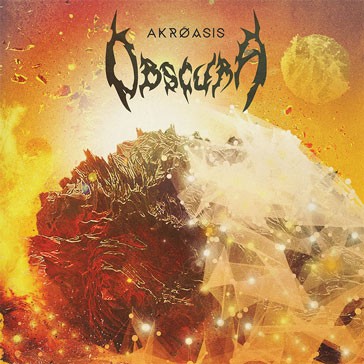 It can be hard to pick up the pieces and move forward with a project after your band decides to leave and form another band that plays essentially the same style of music. When Christian Münzner and Hannes Grossman left Obscura in 2014 to form Alkaloid, a progressive death metal supergroup that also features Obscura bassist and guitar technician, Linus Klausenitzer and Danny Tunker, respectively, and Morean from Dark Fortress, Steffen Kummerer had to start from scratch a third time. His talent search, though, didn’t last long as Tom Geldschläger (who has since been replaced by jazz guitarist, Rafael Trujillo) and fusion drummer, Sebastian Lanser, promptly filled the void, and it wasn’t long before Obscura, version 3.5, created a new masterpiece of progressive death metal that belies the revolving door nature of its lineup.

On Akróasis we see Obscura continuing from new beginnings, that is to say, a band staying true to its trademark sound but evolving it to a form that has benefited from fresh blood and new songwriting strategies, all while staying within the borders of its conceptual and lyrical framework as well. It is a monumental task, to say the least, but Kummerer has pulled it off spectacularly, and truly the lasting impression is nothing short of sheer reverence.

It is a less frenetic and aggressive album, the speed noticeably toned down and rerouted towards a much more rhythmic course, which is very much on par with Death’s Individual Thought Patterns, in fact, a path that fits in very well with Obscura’s style without ever seeming too domineering. Tracks such as “Fractal Dimensions” showcase this marriage of harmonies deceptively well, whereas the title track is more upfront about it but in no way reeking of its source material. One of the major points of differentiation, though, has to be Sebastian Lanser, who is clearly the more gifted drummer, and his techniques at times create an unorthodox yet somehow fluid (not to mention, fascinating) instrumental interplay, such as on opener, “Sermon of the Seven Suns,” and towards the end on “Perpetual Infinity,” which might vaguely seem out of character even for progressive death metal.

Never at one time does the album feel disjointed, though; its constituents exist in full deliberation and therefore in a form of collective consciousness that allows each track to gracefully segue into the next, without one ever competing for attention. The smorgasbord “The Monist,” for example, melds brutality, groove, and archetypal Cynic-like noodling and robotic vocals, solos briefly, then shifts to acoustics and upfront bass lines within mere seconds, then transitions to the title track as if it were yet another natural extension of the same idea even though the guitar techniques are radically different. Indeed, whereas past albums buried aggression under a blanket of melodies and songs existed mostly unto themselves, Akróasis can make a scornful track like “Ode to the Sun” seem beautiful and appropriate within the fold, a talent that yet again recalls Death’s songwriting abilities.

But to compare Obscura to Death would be a disservice to the both bands, as each is still as different as night and day, their differences merely brought together by their similarities, which really aren’t as profuse as one could be lead to believe. What we see with Akróasis is a level of maturity that must have seemed inevitable since Cosmogenesis, for bands of this high caliber rarely stagnate for too long and always find new ground to break. Sometimes the reception can keep a band going (e.g. Death), yet other times, in the tragic case of Pestilence, it can ruin a solid run. With Akróasis, though, I believe we all have the benefit of hindsight and therefore an appetite for innovation, which will always make stylistic shifts experienced here not just welcomed but also wholeheartedly embraced.

"Heavy Metal Hänsel" knows no other form of music and vehemently denies its existence when challenged. Left with only his primal instincts and encyclopedic knowledge of Iron Maiden lyrics to defend his beliefs, he lashes out at nonbelievers and naysayers with falsetto abandon.