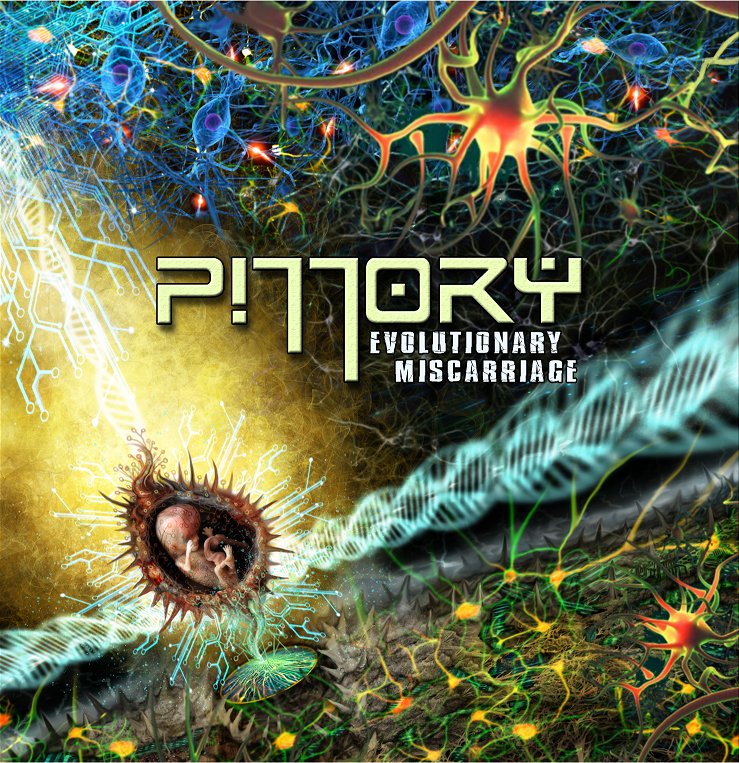 Every man has his limits and every subgenre does too, and when it comes to the latest Pillory album, Evolutionary Miscarriage, both of these are pushed well beyond the boundaries of tolerance. Technical death metal, in all its sensational instrumental aptitude, has collapsed under the weight of its own haughtiness and the resulting mangled mess is no more acceptable as a finished product than the individual ingredients that went into it. What all this alludes to is an album that simply has no flow, no recognizable structuring to create an aural foothold; in short, nothing to sustain the listener beyond three tracks, and even before that point the temptation to walk away is still too great to bear.

Not helping matters, as if the Portal compositional influence wasn’t gratuitously perverted enough, is the production. Quite simply, this album is more processed than Cheez Whiz but doesn’t go down as smoothly, with the drums being the worst offender. The rapid-fire double bass kicks sound too mechanical and clean in their quieted, effeminate thumping, which makes the performance sound too electronic. The vocals, too, are hideously over-processed, the rough edges glossed over to robotic effect, so that no personality remains, even in the most human of elements.

Even when Pillory escapes into real momentum, the NYDM style riffs have a pseudo-breakdown quality that plummets below Internal Bleeding’s lowest moments, feeling exhausted in inspiration and enervated in delivery. Having vision is clearly not enough; one needs a roadmap for guidance, and Pillory has traveled to unnecessarily long and meandering lengths to meet their final objective. Metal, like life, is more about the journey than the destination but here nothing between points A and B is worth visiting. Keep moving, my friends; greener pastures await you.

"Heavy Metal Hänsel" knows no other form of music and vehemently denies its existence when challenged. Left with only his primal instincts and encyclopedic knowledge of Iron Maiden lyrics to defend his beliefs, he lashes out at nonbelievers and naysayers with falsetto abandon.