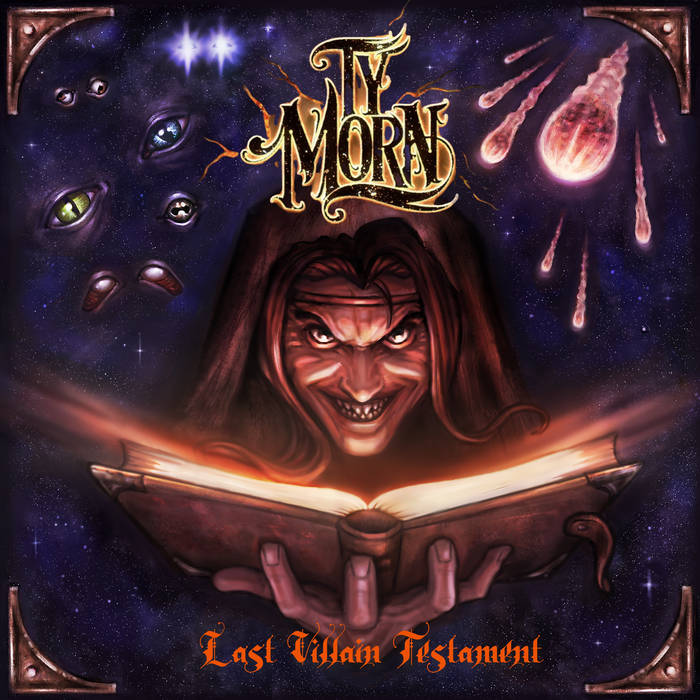 The power of tightness

Ty Morn is a bandname I’ve frequently confused with Tad Morose, not only due to the same TM initials but also the way that it could be a person’s name, provided their family was given to gloomy thoughts. In the case of Ty Morn, the outfit arrived more recently and aligns to some extent with the idea of a solo project, since Aron Biale began writing alone in 2018 and was joined by plenty of guests for Istor, among whom Rafael Gazal (vocals) and Per Mikkelsen (drums) return to help out with sophomore full-length Last Villain Testament. In a fairly similar bracket to the debut, Ty Morn’s second album dials in epic coordinates through the use of classic heavy metal ideals, yet here an increase in tempo gets the ensemble through 10 songs in just 46 minutes, while a concept about a morally dubious character named The Warlock, who looks back at man’s battles with himself and nature from the position of a final survivor, gives a strong coherence to the themes. From the cover art alone, I’m reminded initially of Ignitor’s The Golden Age of Black Magick, which bears some stylistic parallels too. 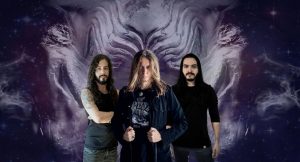 Though Biale’s avowed influences on Last Villain Testament include more traditional rock than I would expect, my own ears tell me that Ty Morn are destined for approval from fans of punchy epic metal like Visigoth or the harder power metal style of Primal Fear and Gamma Ray. In the main, that stems from the pumping rhythms on the majority of the songs, certainly pushing the tempo beyond what classic bands of the ‘80s did. That said, features of that period remain in the chord-based riffs of “Come Feed Us Night” and the manner in which the vocals and guitars there construct call and response sections elevates momentum without actually increasing velocity. By contrast, several songs are loaded with double bass drumming and thrumming melodies that cannot be equated with the chest-beating epicness of Eternal Champion, hence why I would refer to this effort in a different manner to most epic heavy metal. The key difference, aside from the speed/power zip and a light smattering of keyboards, comes with the modern approach, since Biale never attempts to conceal his apocalyptic themes or guitar pedals, opening “War of Nations” with sounds of airborne destruction and even allowing “Lifting the Curse” a momentary djent flavour.

As such, the prevailing mood hanging over Last Villain Testament strikes a fine balance between vicious and triumphant, somewhat like that heard on Gamma Ray’s Somewhere Out in Space or Stratovarius’s Nemesis. I’m not merely saying this because I like those albums a great deal, Ty Morn actually adopt a similar sonic profile at times; for instance, “The One” opens much like a lost Gamma Ray standard, brings in the keys to increase the drama, indulges in a neo-classical lead guitar fill, and then scuds into a wonderful chorus section that’s a dead ringer for the pre-chorus of Pyramaze’s “Symphony of Tears”. However, these familiar references get handled extremely competently, plus the same song transitions into an unexpected epic metal opera where the interplay between rhythm, melody, and vocals is so closely matched as to make it unmissable. As slightly the longest track (nothing else exceeds 5 minutes), “The One” definitely stands out, highlighting the fabulous execution of borrowed influences alongside the brainwaves Ty Morn are capable of themselves.

In the end, whether or not you consider novelty essential to a great album, Ty Morn should be able to win you over. For me, the tightness – playing ability and songwriting too – really pulls everything together, since any scepticism simply brushes aside from contact with the onrush of metal goodness. Basically, Last Villain Testament doesn’t leave me any time to doubt the quality of any single part, seeing as Ty Morn have meticulously attached content to content and left nothing bare, wrapping extra layers of melody where other bands might leave a plain riff or bridge, then found a production compromise that benefits every instrument, even the chunky bass. Particular plaudits must go to João Corceiro for a remarkably integrated lead guitar performance and Rafael Gazal for emulating a lot of great power and heavy singers as well as keeping impeccably balanced throughout some pretty quick sections. Nevertheless, arguably Biale himself still manages to steal the show, and that’s down to a superlative riff count, not to mention massive success with detailed song structures. Tad Morose should feel lucky to be mixed up with Ty Morn, because these guys rule.